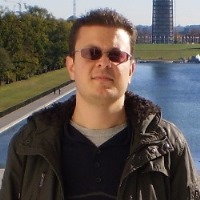 George Drosatos is a Researcher at the Institute of Language and Speech Processing, Athena Research and Innovation Centre (ILSP / Athena RC) in Xanthi (Greece). He received his diploma thesis in Electrical and Computer Engineering from Democritus University of Thrace (EECE / DUTH), Xanthi (Greece) in 2006. In addition, he acquired a Master’s degree (March 2010) and a PhD degree (December 2013) both from the Department of Electrical and Computer Engineering of the Democritus University of Thrace. Furthermore, he was a Postdoctoral Fellow (2013-2014) at the Institute for Language and Speech Processing, Athena Research and Innovation Centre in Xanthi (Greece). In 2015-2016, he was Associate Researcher and Project Manager of CARRE Project at School of Medicine (MED), Democritus University of Thrace in Alexandroupoli. In 2017-2018, he was Research Software Engineer in EROGamb Project in the Department of Computing and Informatics, Bournemouth University (BU), UK.

Dr. Drosatos has interdisciplinary background in various areas (Electrical Engineering, Computer Science, Health Sciences and Mental Health) with focus on privacy-enhancing technologies and information security and he is very good to coordinate, communicate and manage large working groups. This ability was gained through his experience as project manager in CARRE project (EU FP7-ICT-611140) and other activities within research projects (participation in 7 projects).

Last but not least, Dr. Drosatos teaches undergraduate and postgraduate courses at the Democritus University of Thrace (DUTH), the International Hellenic University (IHU) and the Neapolis University Pafos (NUP). The full list of courses is provided here.